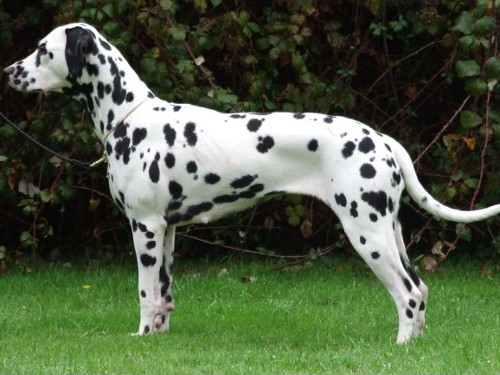 In 2006, Tatanya McClurg from Devon contacted me regarding our boy, Caprilli's Cool As Ice JW - "Monty", and after exchanging pedigree information, pictures, and long conversations I allowed her to use my boy at Stud to her "Ellie". I loved the type this bitch presented, and even though Tatanya was not an exhibitor, her family had owned Dalmatians for over 40 years. Always girls and they always bred one litter from each of the girls. I simply could not resist after seeing the pedigree which goes straight back to some awesome Dalmatians, including Clydevale Quizmaster in 5th Generation.

Ellie’s litter was born in 2006 and consisted of ten gorgeous puppies that were all of excellent type. I visited the litter at five weeks of age, and it took me exactly ten minutes to pick up Tilley. She trotted passed me, and since I am a sucker for soundness and movement she immediately caught my attention. Sarah Bonner was contacted immediately and was asked if she would like to co-own the girl with me and to my delight she agreed.

Tilley was of an old fashioned, cobby, strong and muscular type. Not tall with dark, dark eyes and a very strong temperament that was never fearful, ever. At a very young age she was able to hold her topline better than most mature Dalmatians and she carried this right through to her Veteran years. She has gained over 15 Best of Breed awards, won multiple Groups, gained her ShCM (Show Champion of Merritt) and to top it all won BIS Veteran under Frank Kane at a large, British Championship Show. Sarah had never handled a show dog before!

To view more generations and to calculate her Pedigree CLICK HERE please.