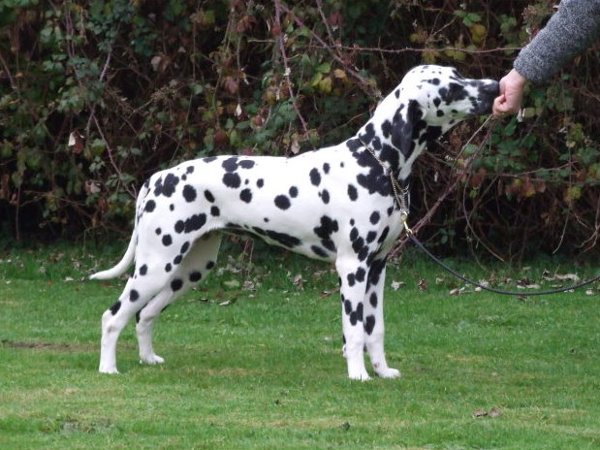 DOB: 14/04/2007
BAER ++
HD A
Height: 57cm
Weight: 28kg
Full Dentition
Black and White (BbEE)
British Studbook Number
Show Champion of Merritt (ShCM)
Dallydyl 2010 Litter
Dallydyl 2012 Litter
About Mathilda
In 2006, Janet Saunders of Dallydyl Dalmatians in the UK tried to mate the beautiful Tyrodal Puma with Dallydyl to our boy Caprilli's Cool As Ice JW. It was not meant to be and somehow we both ended up liking the idea of combining our pedigree's so much that either one of us tapped into it.

In 2008, my Caprilli G-Litter was born and along came a number of rather nice puppies. From this litter I ended up keeping Tegan in Co-ownership and Janet bought Mathilda, who later become the mother of two Dallydyl Litters that were of exceptional quality. Janet kept Beatrix from Mathilda’s first litter and I imported Eloise together with a bunch of friends to the USA from Mathilda’s second litter.

Mathilda herself is a lovely mixture of both her parents; she LOVES to smile and absolutely adores the show ring. Throughout her show time she was qualified for Crufts each year and won many BOB and Group awards at Open show level, gaining her the Title of “Show Champion of Merit” in the UK. She also gained her Stud Book number in the UK, qualifiying her for Crufts for life.

Just like her mom, Fancy, she was always quick to recover after a litter due to her very tight muscle tone and ended up taking highest awards ten weeks after her puppies were born. Janet is now very much looking forward to campaigning her in Veteran classes.
Her Pedigree