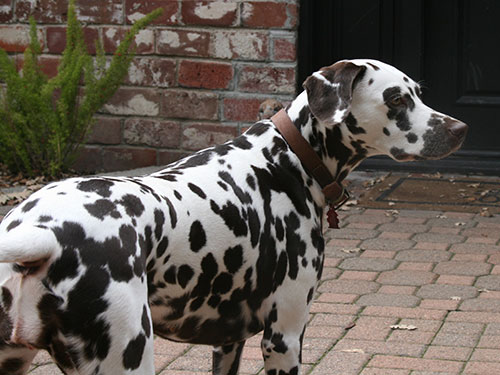 Find Kona on the OFA Database

Kona, our Holly daughter came along in Holly's 2013 litter which consisted of six bilaterally hearing puppies with all dark eyes and no patches. I had a very hard time deciding which puppy I should keep in co-ownership but in the end it had to be her. She is of a lovely old fashioned type and has a wonderful and sunny predisposition. Kona is co-owned with Michael Debone.  Michael is enjoying his time with her, taking her to beaches and on hiking tours. He reports that she acts like a true Caprilli, greeting both humans and other dogs with great enthusiasm.

In 2016 Kona gave birth to our Caprilli N-Litter. All puppies are LUA and Caprilli's Never Say Never moved from California to Hesse in Germany to live with Melissa Glasner and her Somora's Dalmatians. Elliot as he is called already has offspring in multiple countries. Many do very well in the Show Ring.