Caprilli's I Have a Dream - "Humphrey" 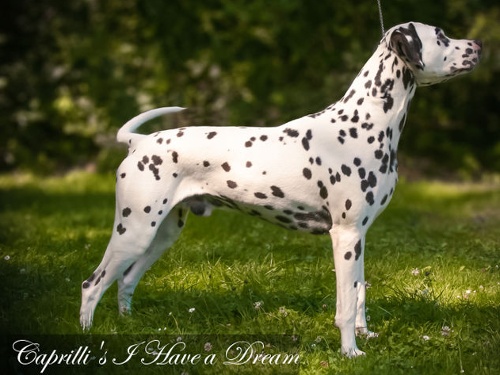 Find Humphrey on the OFA Database

When I think of Humphrey, I immediately smile. Of course, there are many reasons why I would! First of all he is a grandson of Monty, who I loved more than words can say and who tragically got killed in a car accident before his third birthday. Of course this is the sentimental side, but also one of the reasons that I started to breed in the first place. Putting this aside and all I can say is that he is just one awesome and handsome Dalmatian guy.

He is one of the very few Dalmatians that I know who not only have HUGE movement but also have very correct movement. Look at him coming and going and you will never find a paw out of place. This, and his awesome personality, enabled him twice in one year to win BIS at two Club winner shows. On each occasion he left over 90 Dalmatians behind him. He had a great time at shows and has just returned to the Veteran ring at almost nine years of age. So far during only three starts he obtained 3 x Best Veteran in Breed, 3 x Excellent 1 with Veteran CAC, 1 x BOS and 1 x BOB, 1 x BIS Veteran No. 4! He still flies.

He is also a wonderful clown with an extroverted nature. He is by no means just a lucky pup, since he has some very nice litter brothers and sisters as well as some amazing dogs on his pedigree. His mom, Tilley, qualified for Crufts every year, gained her GB Show Champion of Merrit and took BIS Veteran at a massive all breed show this year. Multiple of his offspring have gained many titles across the European continent. His Grandson Harlow - Caprilli's Panache Over Sassafras has a blast in the British Show ring and remained unbeaten during his puppy classes, taking two BIS Puppy at two seperate British Club shows.

He is line-bred to the legendary Spotnik’s S-Litter and his Irish Grandma went strong up until 16 years of age. To sum it up; he is an awesome Dalmatian. More information and his litter statistics can be found on the Extra Editions Website which belongs to his Co-owner. He lives and is loved by Jill Peters who I would also like to thank for her wonderful pictures of Humphrey and even more so for keeping him safe!

Well, what can I say apart from a huge THANK YOU to everyone who helped to show this guy! Jill has never owned a show dog in her life, so she was more than grateful not to have to enter the Show Ring when Michaela Doerfer offered to take him in for her.

It was also Michaela who showed him to all but the last CAC for his German Champion title, who showed him to his Croatian Title, and who basically made his show career. Stefanie Rekik (owner of Perdita’s Sparkling Star) showed him to BIS at the Dutch Dalmatian Club show.

From there on his Italian family; Donatella Soldati and Guido Bottazzi, helped to complete his international title and added the Luxembourg title too. Humphrey took it all in his stride and maybe in his bounce as well. Now handled by Melanie Mueller, he has taken his first CAC from the Veteran Classes at just under nine years of age and I am sure that more are to follow.